Island Vintage is best known for their coffee, acai bowls, and breakfast sandwiches. However, soon after they opened a little shave ice kiosk on the ground level below their second-floor Royal Hawaiian Center location they became a major player in the Hawaii’s most famous frozen treat.

How have they been able to compete with nearby legacies such as Shimazu and Waiola? By offering a distinctive gourmet take on shave ice that has alluded Oahu until recently. Ululani’s corners the market in that capacity on Maui, but until they set up a franchise on Kalakaua avenue Island Vintage is king.

Island Vintage Shave Ice uses fresh, locally sourced ingredients, using real fruit puree in their syrups along with premium takes on ice cream, condensed milk, haupia cream, mochi, boba, and other toppings. The staff is fairly generous if you request “extra” (for a small price) on anything, so be delightfully prepared to get what you ask for. Island Vintage Shave Ice has become so popular that they now have a second location on Kalakaua closer to Honolulu Zoo. Stay tuned, as more will surely open up in the future! 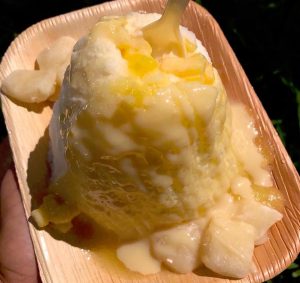