From HIFF: Established in 1981, the Hawaii International Film Festival is a non-profit organization dedicated to the advancement of cultural exchange and media awareness in the Pacific Rim. HIFF is a premier international film event that has won the praise of governments, filmmakers, scholars, educators, programmers and film industry leaders across the globe. HIFF’s programming has two particular mandates: to be a festival of record for emerging films from Asia and the Pacific, and to present the top festival films from around the world, annually screening films from over 45 countries. HIFF also presents content and panels in the fields of film and music, and mobile entertainment and gaming. These transmedia programs reflect HIFF’s commitment to exhibiting innovative creative content coming from the Asia Pacific Rim.

Rewind back to 2011, when HIFF introduced critically acclaimed and Hawaii-filmed The Descendents. The audience was delighted, noting that a Hollywood film finally gave the world a look at the other side of the islands – one filled with cloudy skies and family units with real problems that don’t frolic happily in the surf everyday. This film represents the kind (or da kine) of gems you’ll find at HIFF. 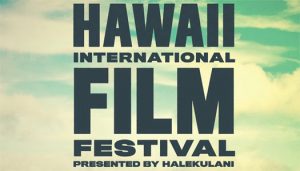