For the uninitiated, malasadas are a fried dough confection that is (or at least supposed to be) crisp on the outside and chewy on the inside. The traditional version is unfilled and coated with granulated sugar and/or cinnamon. It’s a staple pastry in Hawaii, but like quite a few things on the islands it was transplanted from larger continents to the east. The malasada is of Portuguese origin, but Hawaii had its way with the doughnut-esque treat and now you’ll find them cream-filled with coconut, haupia, mango, lilikoi, pineapple, and seasonal flavors.

There are many other bakeries, food trucks, and farmers markets on Oahu that sell malasadas, which makes “the best” a heated debate topic among foodies. But honestly, no one does it quite like the most famous bakery on the south shore – Leonard’s. Their malasadas are consistent (which is great in their case) and the cream-filled varieties a delightfully gooey. It’s within the latter that we urge caution – do not wear a good pair of shoes, pants, or a shirt without a bib. No matter how careful you may be the magic that is stuffed inside of a Leonard’s Bakery malasada will escape its core and mess up your gear. This public service announcement is really a compliment however, because Leonard’s does not skimp on the filling.

Leonard’s Bakery also has a massive selection of pastries, cakes, pies, and cookies behind the counter to tempt even the most dedicated Peloton warrior. Nary a soul can walk in and leave without a famed pink-box full of malasadas. And if you can’t make it to the Kapahulu brick and mortar location (near Waikiki) then you can catch Leonard Jr’s Malasadas food truck in Hawaii Kai at Koko Marina Center (right by Kona Brewing Co).

Extra Tip: Rainbow Drive-In is a 10-minute walk from Leonard’s. Grab an early lunch at Rainbow and come to Leonard’s for the finishing touch. 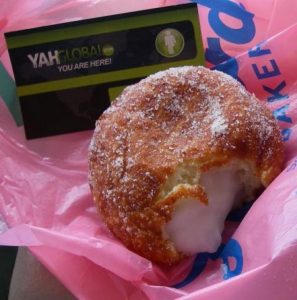